Dear Discolovers, today we dedicate ourselves to an all-female theme that I personally love very much… in fact we are talking about shoes !!! In fact, one of the fashions that most distinguished the fabulous 70s were the wedges, nicknamed “rafts” or by the English called “platform”. 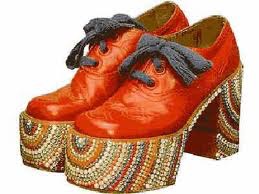 Although the origins date back to several years earlier (Carmen Miranda already wore them), it was the 70s that decreed its success. Like all fashions, this one too had a slow and progressive start around 1973, a peak of maximum popularity in 1974/75 and a slow and steady end after 1976. But fashions, as we well know, always return, and in fact for next summer, many designers have proposed the wedges again, certainly revised and corrected.
The 70s, we always remember, were years of deep social struggles and even fashion was affected. The wedges, for example, became a must of the fashion of the time thanks to the feminist movement: in fact, in the wake of the youth protest, even the female condition sought in the miniskirt those symbols of emancipation and full social autonomy. But the mini, which on the one hand had represented the “free” woman, but on the other had strengthened the bond between a sexy woman, an object woman, and this was a concept little loved by the feminist movement which during the early 70s, in full boom miniskirt, sanctioned the sentence, guilty of representing the woman only under the aesthetic aspect. And at the same time folk music was also spreading on a large scale, it was therefore a game-force that fashion inevitably converged towards peasant, rural, gypsy images. This meant foot-length skirts and above all clogs. And it is precisely the clogs, with the typical wide heel and the typical wooden wedge, that marked a trend that spread to common footwear. 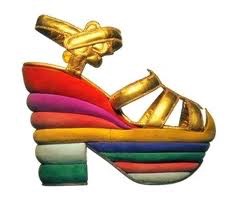 From about 1973, therefore, shoes and boots took on this characteristic and with wedges on their feet, women also saw the difference in height towards men decreased, and this could also mean equality between the sexes. The toe of the shoes was slightly squared while retaining its roundness, the sole was strictly wide, the heel, as we said, wide and high. The wedges were made of wood or (the lower ones) of leather. In summer, cork was also used for lighter sandals. There was not much difference between the height of the wedge and that of the heel. Maybe a few centimeters, and this helped to give comfort to female feet from the 60s with stiletto heels. 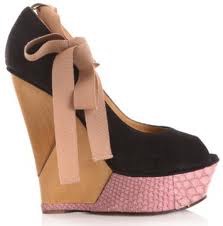 Even men’s feet, albeit in a decidedly lesser shape, succumbed to this rampant fashion. Maybe the wedge was more like a large sole (1 cm. Or 2) but there were also models of 4 – 5 or more centimeters like those adopted by the then rising star Elton John. With the help of very long and wide flared trousers, it was even possible to cover practically the entire wedge. 1974 was widely marked by this fashion but in the following years, as in all fashions, the phenomenon began to downsize in favor of a narrower heel and an ever smaller wedge.
But now they are back, very similar to those of the time. I personally don’t love … feminists don’t want it, but a woman on a 12 heel is all a ‘
another story. But what do you Discolovers think? You have worn them … but above all: will you wear them next summer ????