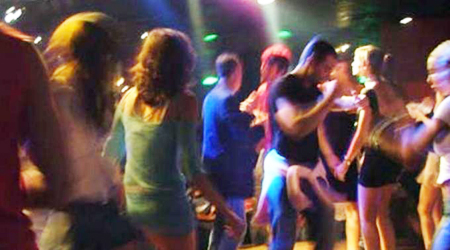 At the end of the 1960s the rhetoric was rampant (peace, love, free sex) and certain drugs were able to expand the mind, they were drugs of the head. While the hippie counter-culture used LSD and other drugs derived from hallucinogenic mushrooms, the disco-gay scene was dominated by “stimulants”, such as the Popper.
POPPER was inhaled directly on the track and caused a sharp drop in blood pressure and a state close to unconsciousness. There was also QUAALUDE, originally a sedative-hypnotic that led to a state of euphoria and relaxation with a consequent decrease in inhibitory brakes. It represented a return to the body in a physical and political sense, and even the drugs that accompanied the phenomenon were ‘physical’, they were drugs to ‘act’.

THE SYMBOLS
Drug emblems were in all New York clubs. Impossible not to mention THE MAN ON THE MOON in “Studio 54“. At midnight a crescent moon with a human profile was lowered towards the public, next to a spoon full of luminous crystals which in turn illuminated the nostril of the profile up to the eye.
It was the end of the ’70s, the VIP drug burst onto the scene: COCAINA.

ITALY: A REALITY SEPARATELY
More subdued was the “Droga & Disco” phenomenon in Italy.
When the fashion for discos also exploded in Italy (1977-1978) the boys found themselves at a crossroads. The pressing and invasive political commitment required by the militants of the schools or the evasion of the disengagement represented by sports activities and the nascent discos? This watershed was also determined by the financial possibilities of individuals. buy some weed. There was no such thing as cheap drugs, and often the circles boys had to go to to get them were quite dangerous, but drugs had already taken hold in schools and militant politics.
Companies were a rampant phenomenon at the end of the 70s (“The warriors of the night”), even there the divisions between “disco” and politically engaged were clear-cut.