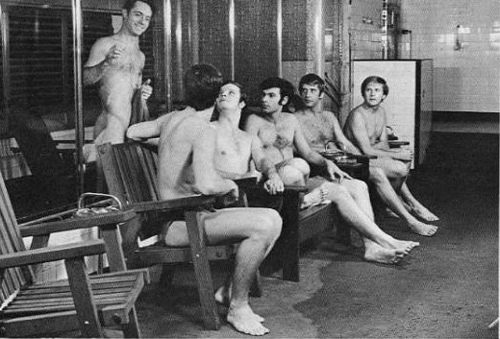 Disco music in the early 70s was intended for groups such as the Black, Hispanic and Gay minorities. As it was difficult for these groups to assemble in public places, early parties became local ‘private’ gatherings by invitation, where drugs were consumed and attitudes to sex were liberal and were disco was the music of choice. This came about through increasing tolerance and the advent of the contraceptive pill.

A new perception of sexuality moved more into the public consciousness. Meeting between people became more visible: the gay clubs were created, private basements, lofts where they can express their sexuality. Some venues will be remembered just as a place of free sex. One of the places that drove this new trend was the Continental Baths.

The characteristics of this local disco with a dance floor, a cabaret lounge, sauna rooms, a swimming pool that could meet the needs of nearly 1,000 people, 24 hours a day. A guide described the gay Continental Baths as a place that “has revolutionized the rite of body care in the New York of the 70s.”

In America as in Italy, the industry married Disco and Sex into one lifestyle product.

Summer and Lady Marmalade sang about sex and hedonism.

Album covers became more alluring and provocative: the buyer was targeted by photo artist in very risqué poses. This fact gave birth to a new and more detailed search of pleasure, which influenced future generations in terms of sex and music.

Emblem of the sexual component in the disc is without a doubt “Love To Love You Baby” piece of Donna Summer of 1975, “the scandal single” with 16-minute simulated orgasm.

Shapiro: “The increasingly explicit sexuality and the removal of restrictions on the rights of homosexuals produced a vulgar machismo especially among colored artists.” Homosexuality was not only a phenomenon of the disc, but Rock artists built part of their character playing with the look and confusing nature of their image such as David Bowie and Elton John.

Disco, in all its aspects, was then tied to the fun and happy sex.

The song “I FEEL LOVE” expressed Motion, Escape, Fantasy, Fun, Physical, Sexual Gratification; contained fake orgasms, fully synthetic sounds, percussive effects, in short, a masterpiece of eroticism mechanic. Before then, no song had pulsed in a manner so visceral.